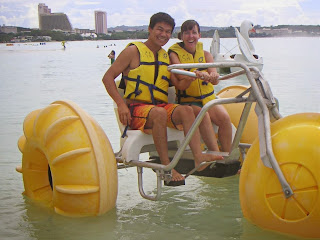 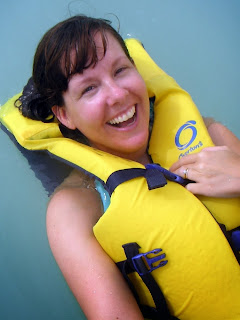 "Guam: Where America’s day starts!"  Posters everywhere shout that slogan to make sure you remember that this little island is bona fide US of A - as if all of the license plates with “Guam USA” in big letters aren’t enough to keep it buoyant in your subconscious.  It might actually be easy to forget – for all the Japanese signs and tourists everywhere around Tumon beach.

Nevertheless, it’s been really interesting to visit this far flung territory way out across the Pacific.

And it's a big change from Chuuk!  Now Chuuk’s a perfectly nice place – but we’d been scheduled to be there for almost 3 weeks on account of flight availability.  However some chumming up with the station manager at the United desk on the airstrip let us get on a standby flight out ahead of schedule, and scored us a few bonus nights here as a free stopover.  Nice!

Guam- Japan World! This place is paradise for the Japanese: nice beaches, seafood and mega retail. I did feel like I was back in Japan. Although our stay wasn’t for very long we got to hang out on one of the beaches were we hired a water trike which was good fun and a mini work out at the same time!

Email ThisBlogThis!Share to TwitterShare to FacebookShare to Pinterest
Labels: Guam

Chuuk looks like the idyllic place to chill- turquoise waters, small tropical islands, coconuts- pure paradise. However, Chuuk hasn't really caught up to its tourist industry potential and there are no beaches, swimming pools, bars and it has around 4 restaurants on all of the islands.  There is only one reason why most people currently visit Chuuk and that is the wreck diving. The Lonely Planet had warned us about the dangers of walking around Chuuk, particularly for women, and some of the men do look slightly intimidating in their baseball caps and chains.  Having scratched below the surface this turned out to be untrue and an unfair representation of the people who were all very friendly and genuine.


When we arrived they were building a new concrete road right through the middle of town. Cars would travel around 5 mph playing Chuukese music (vocodafied) that was super chilled. We particularly enjoyed the amazing coconuts and the traditional breadfruit which came wrapped in leaves. At the High Tide restaurant, our local, we even got free coconut refills and never went hungry as they would pile our plates high with garlic rice.

After diving we decided to go to the small tourist office where we met Mason, who shared with us really interesting facts about the Chuukese culture. His face got super serious when he spoke about the importance of coconuts and how you should never bring your chief the wrong type! Ty and I both wanted to see and find out more so Mason offered us a tour of Tonowas Island, his home. This was very lucky as the Chuukese guard their private lands and it is uncommon for tourists to be allowed to visit.

It's hard to believe that the Japanese had tens of thousands of troops stationed on Dublon island (now called Tonowas).  Now there's just the rudiments of one road overgrown with weeds and scattered crumbling concrete remains of assorted fortifications and structures as evidence of the occupation.  Mason's family home is actually built on some of the foundations of the old Imperial Navy hospital, and it was fascinating to visit.  Got to check out his nephew's breadfruit mashing stone, and we had some freshly harvested coconuts from the tree behind the house.  Nice!

Email ThisBlogThis!Share to TwitterShare to FacebookShare to Pinterest
Labels: Micronesia

Seeing as the last time either of us had really SCUBA dived was over a decade ago, going straight into the deep wreck diving in Truk might seem a bit ambitious.  Sure, we felt okay having done a thorough refresher "dive" in a pool back in Hawaii - but this was the real thing!

Indeed, our very first dive on the Shinkoku Maru involved penetrating the innards of the silent ship - entering into dark, narrow spaces through collapsing superstructures and rusted doors leading to a ghostly sick bay operating room.  Sure, there were plenty of interesting things to see in there - but taking pictures was NOT high on my priority list! I was quite happy to see the light of an exit hole...

Nevertheless, a few dives later we were both feeling way more confident dropping into cargo holds full of fighter planes and torpedoes, slipping through skylights into engine rooms or swimming through fractured aircraft fuselages.  The dive guides were excellent and professional, and it feels great to be diving again.

Diving into the deep, dark depths of the lagoon was indeed pretty daunting at first. The visibility under water was much less than I had anticipated or been used to on previous reef dives abroad, and the structure of the ship massive and ominous. Hundreds of mini jellyfish were swimming around towards the surface and stinging us. Don't worry they weren't the deadly types! However, the dive leader Brian led us straight into the ship through a small entrance and we followed entering into the sick bay. This didn't seem too bad at the time, but we were both happy to also get out pretty pronto! He also pointed out a big medicine chest with bottles and some gas masks, adding to the eerie feeling of the whole dive.

On the Fujikawa Maru there was a bit more light, and I could see different coral and marine life. Brian spotted a really interesting nudibranch (you can see in the photo above) and a Hawksbill turtle. He also showed us some relics like chopsticks in a case and some crockery. We went down into the hold. Ty climbed into a bomber inside, but unfortunately I didn't see him! I enjoyed this dive a lot more.

After a day chilling out, we went back out again. This time the weather was calmer and we felt more confident. The first dive was the Kensho Maru. Again, this was eerie and the visibility not great. I decided I didn't want to penetrate this ship and was more than happy swimming around looking at the corals etc. This was an ok dive, but nothing in particular stood out.

The final dive was the Betty Bomber. Ty had been excited about seeing a plane. The conditions were good and there were lots of pretty fish- moorish idols, butterfly fish etc. We both climbed into the bomber, on separate occasions, and swam through the fuselage which was fun as there were lots of dark fish obscuring the entrance and many small fish hiding inside the wreck. This was the best dive by far and we both felt happy to have experienced four wrecks out of the scores that are in Truk Lagoon.

Email ThisBlogThis!Share to TwitterShare to FacebookShare to Pinterest
Labels: Micronesia

The Island Hopper - Honolulu to Chuuk

A few times a week United airlines runs a somewhat bonkers flight affectionately dubbed "The Island Hopper" from Hawaii out towards Asia. It definitely feels a bit weird to be in a short-range 737 jet over the middle of the Pacific Ocean -  but sure enough the little specs of land pop up on schedule and the plane screeches to a halt on the tiny runways. You get to walk around for a while - then it's back on the bus!

We somehow lucked out onto a private tour of Pearl Harbor for newly stationed Navy sailors led by a senior officer from the base.  The last civilian tour boat leaves at 3:00pm and we didn't even show up until almost 4:00pm, but a friendly National Park ranger set us up with the USN tour at the last minute.  The Navy official at the dock said that "as taxpayers, you are entitled to come on board".  We kind of stayed quiet at that point.

We sailed passed the giant USS Missouri which had been utilised in 4 different wars, and had been attacked by one lone 14 year old Kamakaze pilot towards the end of WWII. This was particularly interesting for us as we had made a special visit to the Kamikaze airbase museum in the small village of Chiran, Japan in April. The pilots are hailed as heroes in Japan, each one commemorated with one of over one thousand stone lanterns lining the streets of Chiran. On the tour we found out that the captain of the USS Missouri at the time, realising the horror of war, gave the young Japanese pilot a full military naval burial. I wonder if he has a stone lantern in Chiran? Our final destination on the tour was the USS Arizona Memorial. This was a simple and fitting tribute, covering the wreck, to all of the Navy sailors who lost their lives in Pearl Harbor. This included the names of men from the same family. Since this defeat the US Navy no longer allows family members to work on the same vessel.

Early the next morning, we got on board UA154 at HNL.

After about 5 hours in the air, the first land we see is a giant set of 3D glasses... Then the tiny sliver of a runway comes into view. Yes - it's in the second picture...  This is a seriously small island - and it's the capital of the Marshall Islands!  More importantly, the guy in the shop at the airport was selling home-made breadfruit chips!  (I've been on a mission to have breadfruit since reading Michener's Hawaii decades ago!)

Super secret giant US military base island - home of all kinds of missile defence systems and other hush hush programmes.  Apparently.  Nevertheless, there's certainly lots of important and expensive-looking golf ball radomes and military equipment around.  At this stop, you can't get off the plane and armed military staff come on to search all carry on bags...

Yes, that's a crab running through the departure lounge. Awesome!
Plus, a man to greet you off of the plane with umbrellas in case of rain!

Arrival! Truk lagoon is a handful of beautiful volcanic islands in a big shallow turquoise and blue bathtub ringed by coral reef.  A real counterpoint to yesterday's visit to Pearl Harbor, this bathtub is the final resting place for scores of ships from the Imperial Japanese fleet following Operation Hailstone in Feb 1944.  It was also our stop to get off the bus...